How to Claim Insurance for Bicycle Accidents

On average, there are over a thousand bicycle accidents per year in Wisconsin. Of these, the most serious injuries are caused by car-bike collisions. While we represent cyclists injured in all manner of accidents caused by the carelessness or negligence of others, the focus of this article is on the cause of most serious bicycle injuries: Collisions with vehicles.

Regardless of whether you are seriously injured in a bicycle vs. car collision and looking to get reimbursed for your medical bills, just trying to get compensated for damage to your bicycle, or are the spouse or relative of someone killed after being hit by a car, the personal injury attorneys of Warshafsky Law can help. 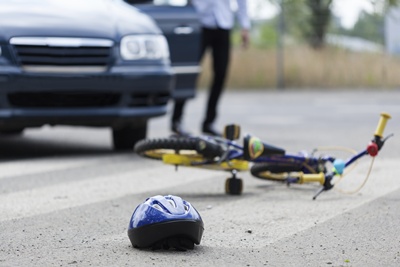 Assuming you’re conscious after being hit by a car, you’ll need to report the incident right away. Calling 911 will result in a police officer being dispatched to the scene. The officer will question you and anyone else involved in the accident and write up a report of what happened. If you feel you have not been injured enough to call 911, you can also call the police department and request an officer come to the scene.

The written report filed by a police officer plays a critical part of any insurance claim you make or injury lawsuit you may file, so even if you haven’t been seriously injured you need to get a police officer on the scene to write a report. Consider, too, you may find later that what you thought was a little soreness in your neck after being hit by a car is far worse than you thought. Many injuries don’t make themselves fully known until an hour or more after the incident. Plus, your bike is probably damaged, so you’ll need this documented in the police report.

How to Describe What Happened in Your Bicycle Collision

Be careful what you say to the driver of the car, the police officer investigating the accident, and any witnesses who may have stopped to help. Avoid saying anything that could be interpreted as implicating yourself as the cause of the crash. The insurance company for the driver can (and will) twist anything you say into an argument for why YOU are responsible for the crash. For instance, if you tell the police officer you didn’t see the car before it hit you, the insurance company will seize upon that statement and argue that you are the party at fault because you weren’t paying attention.

You definitely need to limit what you say to the driver of the car that hit you. Limit the conversation to exchanging contact and insurance information. If you say something like, “I had to swerve to avoid a pothole,” you’ve just implicated yourself as the cause for the collision. Likewise, pay attention to what the driver says. Often, a driver will make apologies along the lines of: “I’m so sorry, I didn’t even see you…It’s my fault.” These are known as “res gestae” statements (Latin for “things done” ) and are an exception to the hearsay rule based on the belief that statements made spontaneously during an event are highly credible and admissible in court.

The best advice for how to describe to police what happened in your bicycle accident is to simply explain what happened without saying anything which could be construed as you being at fault in any way. You will want to get a copy of the police report, so call the police department a few days after the accident and request a copy. Besides having this for your case, you will want to read it through to make sure it is accurate. If you spot an inaccuracy, you can contact the police department to request it be addressed with an addendum to the report.

Determining Fault in a Car vs. Bicycle Accident

Although fault is determined by a court, many cases are settled before they ever get to court.  The police report plays a key role in the determination of who was at fault when a bike is hit by a car, but witnesses are also helpful—and when there are conflicting statements by the parties involved, witnesses are critical to determining fault.

Consider this scenario, for instance: A cyclist is hit at an intersection by a driver running a red light. The driver apologizes profusely to the cyclist and admits to running the red light. A witness sympathetic to the cyclist offers to make a statement that he saw the cyclist going through the intersection on a green light. The cyclist thinks it’s not necessary because the driver seems like a straight-up gal who just admitted being in the wrong, but reluctantly takes the witnesses’ business card anyway. Thirty minutes later, the driver tells a police officer a completely different story—that the cyclist was the one who ran a red light. Would an impartial witness help sort out the truth? You bet it would! The moral of this story: Don’t leave the scene without trying to get contact information on anyone who witnessed what happened.

In court, blame is often apportioned. For instance, even though it may be true a car hit a cyclist, perhaps the cyclist did a “rolling stop” at an intersection. This is known as “contributory negligence,” and can factor in to the amount of compensation awarded by the court. For instance, if it’s decided that the cyclist’s actions were at least 25% responsible for the accident, the amount of damages awarded would be reduced by 25%.

Taking Your Case to Court

As mentioned, most bicycle injury lawsuits are settled before they go to court. But whether your case goes to court or not, you want a law firm with a reputation for fighting hard for their clients in court. You want Warsharfsky Law.

Unlike many personal injury law firms that prefer to settle quickly with the opposing side’s insurance company and avoid going to court, Warshafsky Law prepares every case from day one as if it WILL go to trial. Our willingness to take cases to trial to get the most money possible for our clients is well known in the legal community. When we file a claim, the insurance companies we’re suing know we mean business and won’t settle for a watered down settlement offer.

How Much Compensation Can You Expect for a Bike Accident?

Compensation depends on many things, such as the extent of your injuries, the cost of replacing or repairing your bicycle, whether you played a contributing role in causing the accident and, of course, the skill of your attorney in representing you.

Warshafsky Law has successfully represented hundreds of cyclists injured by inattentive and reckless drivers, some who face serious injuries such as paralysis. We also represent the families of those who have been injured or killed in collisions with motor vehicles.

With the Madison personal injury attorneys of Warshafsky Law at your side, you can be assured of the best possible legal representation for your case and the maximum possible compensation for your injuries and losses.