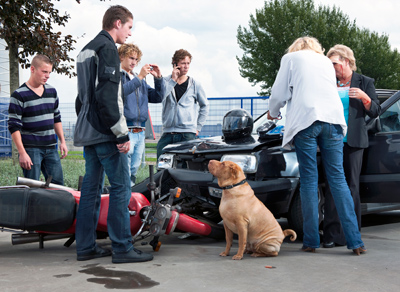 Generally speaking, motorcycle accidents rarely end well for the motorcyclist—particularly if they involve a collision with a car or truck. Unfortunately, insurance companies often try to weasel out of making good on a claim by saying that motorcycling is an “inherently dangerous activity” and, well, tough luck for you.

Well, last time we checked, everyone has a right to ride a motorcycle without being plowed into by a car, getting flung over the handlebars after hitting a huge pothole in a parking lot, or having a front end shake so violently at speed that the bike goes out of control. When the negligence of others is the direct cause of a motorcycle accident, the motorcyclist has every right to expect financial compensation.

If you’ve been injured in a motorcycle accident and believe it was the result of someone else’s negligence, our Madison motorcycle injury attorneys can help. Our reputation for being willing to take cases to court, and our impressive record of legal victories there, is widely known by the insurance companies we face off against. No one will fight harder for you than Warshafsky Law.

Accident Caused by the Driver of a Car

Suits against motorists who cause motorcyclists to crash come under the umbrella of negligence. In such cases, it has to be shown the motorist was negligent. Typical causes of negligence include distracted driving (talking/texting on cell phone for instance), drunk driving, and road rage.

In these suits, a flaw in the design or manufacture of the motorcycle can be attributed to causing the accident. Leaking fuel tanks or fuel lines, malfunctioning brake pads, poorly balanced wheels, defective tires that blow out at highway speeds... and this is just a fraction of the many manufacturer defects known to occur. Contact our product liability attorneys to begin a lawsuit against motorcycle manufacturers.

Injuries caused by the negligence of property owners or government entities to properly maintain roadways fall under premises liability law. The construction worker who dumps the water left over in his cooler into the roadway may not be thinking about how the 28-degree weather will cause it to ice up, or the motorcyclist who will slide out on it and have a horrific crash, but that doesn’t exempt the construction company from liability.

Every year, car vs. motorcycle collisions cause hundreds of serious injuries to Madison area motorcyclists, as well as fatalities. Even though Wisconsin’s 2014 traffic death count was the lowest since 1943, there were still 67 motorcyclists among the 491 fatalities.

Hard injuries range from burns incurred from contact with the motorcycle’s engine or exhaust system, internal injuries to the spinal cord, brain or other organs, and broken bones. Soft tissue injuries include “road rash” and other abrasions, sprained or torn ligaments and muscles, and whiplash.

When our Madison personal injury attorneys litigate a motorcycle injury case, we don’t just take into account your current medical bills. We also anticipate your future medical care and rehabilitation needs. In most cases, motorcycle accident victims require fairly extensive physical therapy. It all adds up fast, and you shouldn’t have to pay for any of it.

Don’t Leave the Scene of the Accident

Wisconsin law requires any motorist involved in an accident that causes property damage, injury, or death to stop at the scene of the accident. Unless you have to be carried away on an ambulance stretcher, you should stay at the accident scene until it has been investigated by police.

Under Wisconsin law, a motorist involved in an accident which causes property damage of $500 or more ($200 for government property), personal injury, or death is required to notify the police and request an investigation. Even if you think you’re not really injured, call the police anyway. Often, injuries don’t manifest until later. If you were not at fault for the accident, having documentation from a police report will ensure you can’t end up being blamed for the accident later.

Take photos of your motorcycle exactly where it came to rest after the accident, along with photos of your helmet (if damaged). If there are parts of your motorcycle broken off on the road, take shots of them where they lie. You’ll also want to get photos of the car, the driver of the car, and any passengers. Get some wide angle photos of the scene, too. This may help later if you need to request video footage from any surveillance cameras which might be at nearby banks or stores. These photos are also useful for documenting where traffic lights and stop signs are located—particularly if they are later changed.

Get Names and Numbers of Witnesses

If possible, you should get the names, addresses, and phone numbers of anyone who witnessed the accident. If there is a dispute over who was at fault for the accident, you’ll need witnesses to corroborate your story. Often, witnesses will walk up to the injured party and let them know they saw what happened and will be happy to be a witness on their behalf. Don’t count on this happening, though. Make the effort to ask anyone standing around if they saw what happened, and then get their contact information.

Get Medical Attention for Your Injuries

It’s hard to walk away from a motorcycle accident without any injuries. Even if you’re lucky enough to just get bruised, it’s a good idea to have a doctor take a look. Often, the symptoms of injuries like brain bruising and whiplash only show up after a few days. Getting treated soon after the accident is also the best refutation to any allegation the opposing side might make that you are faking an injury 3 weeks after the accident just to get sympathy from a jury. Be sure to follow all medical advice for follow-up treatment and get copies of all your doctor’s notes, prescriptions and medical bills.

If you’re able, write down what happened while you’re still at the scene of the accident. Pay careful attention to any admissions the driver of the car may have made, such as “I didn’t see you” or “I’m so sorry!” Such statements clearly imply negligence on their part and can usually be used in court because they are considered exceptions to the hearsay rule.

Both motorcyclists and drivers of cars have what is known as “equal duties of care” when on the road. These duties are to:

If you file suit to recover for your medical costs, damage to your motorcycle, lost income from work, and pain and suffering, you have the burden of proof to show the driver of the car was negligent in his driving. In legal terms, negligence is often expressed as a breach of the duty of care.

The driver of the car may claim you were the one negligent in your duty of care. In such a case, the jury has to determine which party is more credible. If they determine that you were partially responsible for the accident, the compensation awarded to you will be reduced by the percentage which you are deemed responsible. For example, if the motorcyclist is found to be 25% responsible for the crash, they will received 25% less money.

One of the benefits of having Warshafsky Law represent you is our ability to delve into every detail of an accident scene to determine fault. Our investigators are second-to-none and play a critical role in building a rock solid case.

There are many personal injury law firms in the Madison area, but few have the willingness to take a case to trial. Most law firms prefer to cut a deal with the insurance company for the opposing side and move on to the next case. Trouble is, these deals are rarely in the best interest of the injured party. Insurance companies know they can lowball a law firm that never takes cases to trial, and that’s just what they do.

Warshafsky Law is different. We prepare every case from day one as though it will go before a judge and jury, for this is where our clients win big. The big insurance companies we do battle with know we’re not averse to taking a case to trial, and they know we won’t take the customary lowball settlement offers they toss out. If a reasonable offer is made, we’ll only recommend you consider it if it’s in your best interest. Bottom line: We’ve got your back.

Meet with a Madison Personal Injury Attorney Free of Charge

Warshafsky Law offers a free initial legal consultation to anyone considering filing suit for a motorcycle accident. It’s a great opportunity to get an expert opinion on the merits of your case and what sort of financial compensation you can expect to get. There is no obligation whatsoever to hire Warshafsky Law to represent you.

Should you choose to hire us, you will not be asked to make any payments for our services until your case is resolved and you have received compensation. If for any reason we do not prevail and there is no settlement or award, you don’t owe us a penny.